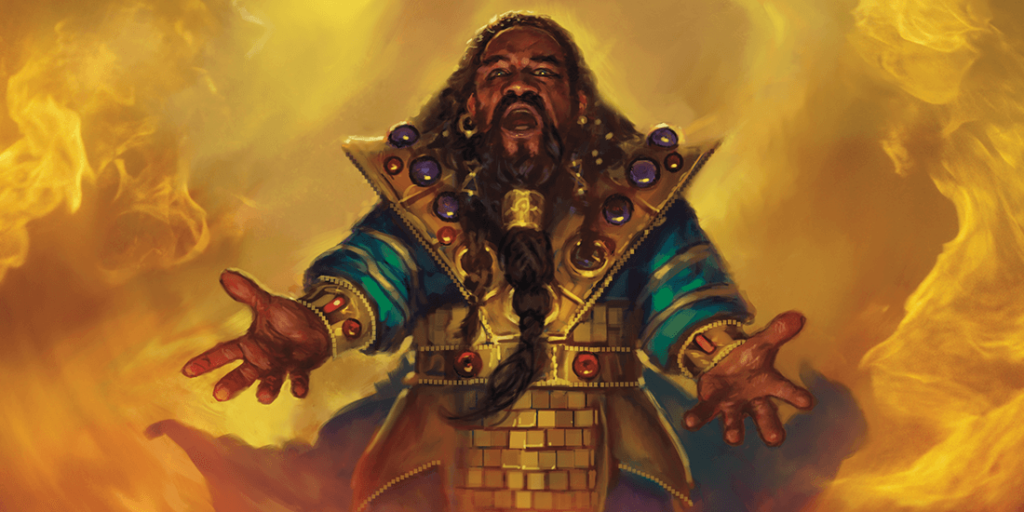 Cleric Wizards are a multiclass that do not get along.

Much like oil and water, these classes are not supposed to mix due to incongruent ability score requirements.

So, today we are going to build a cleric wizard.

To give those reading an understanding of how this works, this post will talk about the inherent knowledge needed to build a cleric wizard, all the while building an ideal cleric wizard to meet the average party’s functions.

This will include graphs useful to give you an understanding of subclasses not discussed, the thought process multiclassing needs to make a synergistic build, and finally useful tips and tricks to make you a better player in playing and building this character.

This will not tell you, the optimal build in every scenario, the guaranteed multiclass for the most fun, or even how to be the best player.

This is designed to give you insights into the knowledge needed to building a cleric wizard, as well as giving you a framework useful to aid you in creation.

So, with that said, let’s talk about what a cleric wizard is!

What is a Cleric Wizard?

To begin our build we need to figure out why a cleric is a wizard and how much they should lean into each class.

To do this, there needs to be an understanding of what each class excels in.

Clerics can work as a battle class wielding a weapon, or a support class administering aid as needed.

Wizards work as a battle caster class that flings debilitating spells to kill enemies or work as a support to enhance the party’s strengths.

When looking at what each does, it becomes clear that while both can do damage, their strongest overlap lies in supporting the party.

As a result a Cleric Wizard should look at building the best member to support the party’s endeavors.

How Does a Cleric Wizard Support the party?

The next question becomes, how does a cleric wizard support the party?

As discussed in great detail in my Wizard Guide, A wizard’s strongest use is using spells to enhance the party and make their lives easier.

Meanwhile, the common practice for clerics are for administering first aid, and hitting enemies with debilitating spells.

Because of this we need to figure out just how far to go into a cleric or a wizard to support the party.

How far you want to go into each class is dependent on what kind of function you would like.

A cleric will give you great healing potential, with powerful party wide stats and debuffs.

Meanwhile a wizard will give your party great utility in roleplay, puzzle solving, and good single target debuff and buffs.

The choice is yours but since this is my character, I lean more toward wizard.

Therefore, I am looking at a character that supports the party through outside combat support and powerful single target spells to assist the party in combat.

Therefore we should utilize a cleric to balance that out.

Alternatively, if you were to specialize in cleric.

Your usual function would be to specialize in party wide buffs and healing, with small boosts to the parties utility in things such as ability checks.

The next question to figuring out a cleric wizard is how many levels in each.

This is the most challenging part to multiclassing, as each level you gain in one class, diminishes your return in your other class.

Because of this, figuring out what gains are worth the return is vital to multiclassing.

The rule of thumb is never go more than 3 levels into a multiclass.

Ideally you want to do 1.

The reason for this, is that after 3 levels the cost to return ratio becomes severely unbalanced forcing your character to be subpar until incredibly late levels.

Which, most campaigns never get to. (Average campaign ends at level 8)

The second reason to ideally go 1-3 levels, is most classes give you the big bonuses to playing the class in those early levels.

At level 3 you will get subclasses to any class.

While level 1, gets you those juicy level 1 subclasses and inherent traits such as proficiency in heavy armor, and the classes level 1 spell list.

Since, clerics get their subclass at level 1.

This makes them an ideal level 1 subclass.

Giving me both level 1 subclass, level 1 cleric spells, as well as access to armor if I choose this class first.

Therefore I will go level 1 cleric for my 1st level, and the rest of my levels will go toward being a wizard.

To help you understand the rewards and payoffs for going deeper into each class, I have attached a chart showing gains and losses the further you go into each class.

We now know our characters functions, level layout, and understand what a cleric wizard is.

It is time to choose the best cleric subclass to support our other 19 levels wizard.

There are a total of 14 official cleric subclasses, each with their own benefits.

To make it easier for those choosing their own subclasses, to the right is a list with a quick summary of their benefits.

Therefore, to build an optimal cleric wizard we should look for a subclass, for that will help in, survivability, outside combat utility, and AOE party buffs that will help the party. 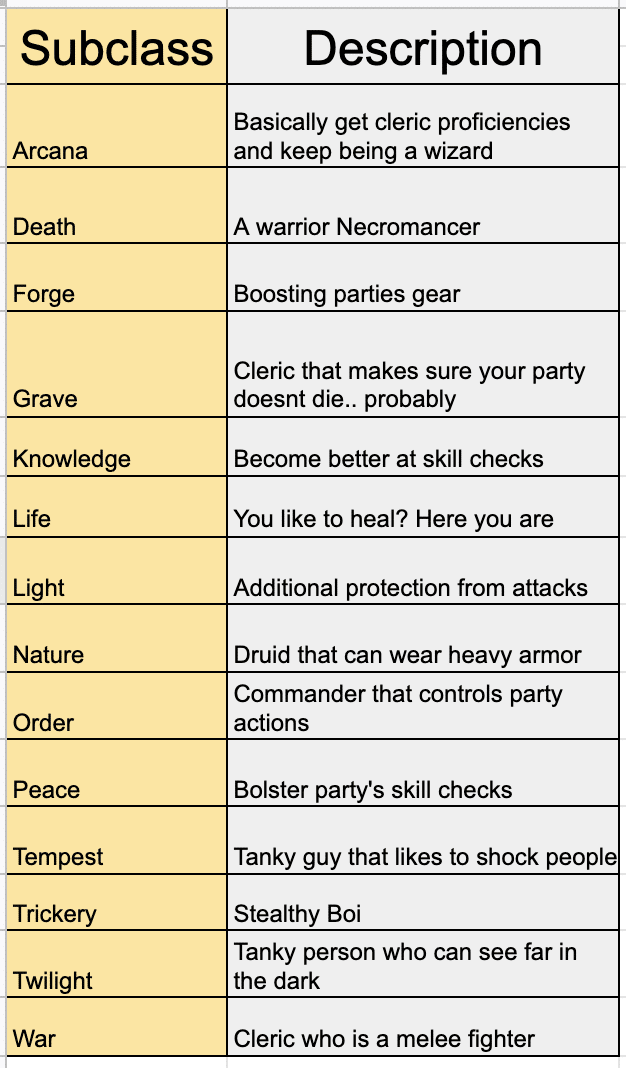 A class such as the twilight subclass will be a good choice for this character. Not only do they give you proficiency in heavy armor, it gives you superior darkvision, and a boost to initiative.

The last one is especially important, as going first means we can boost our party up or remove a threat from the boardstate before everyone else moves.

Moreover, with heavy armor and superior darkvision that can be shared, we increase our chances of surviving in a battle, while also giving a crucial skill to party members who do not have it.

All in all this should shore up a wizard’s party utility while enhancing what they are already good at.

Now that we have the set up of multiclass we need to figure out what the wizard will look like in a cleric wizard.

Ideally, they should share the same theme as the cleric we chose for roleplay, but can be anything you want really.

Since we know we are going to be 19 levels in wizard.

The abilities and traits don’t really matter for this discussion.

What does matter is the subclass choice, as this will determine our level of synergy with the cleric class.

Since the twilight cleric gives a boost to initiative and darkvision, a subclass that feeds off those traits will be ideal.

This makes the chronurgy subclass an excellent choice, as it gives an additional boost to initiative, and has powerful mechanics that can help them party and hinder enemies in its later levels.

Meaning that chronurgy wizards will be able to assist the party more in combat usage and use abilities like chronal shift, to give other party members a second chance if it looks like they will fail.

There you have it!

You have the entire outline for a cleric wizard, in how to build one, subclasses to choose from, and even a brief understanding of what each class does.

Now comes to the part where I give recommendations on what has good synergy with the cleric wizard.

For spells, you can never go wrong with bane and bless for cleric spells.

They are powerful even in later levels which is important, since you are stuck choosing from level 1 cleric spells for the entire game.

As for races, going for one that gives you a bonus in both intelligence and wisdom is the best choice, but if going for a different one, make sure they give a bonus to intelligence if specializing in wizards or wisdom if focusing on clerics.

Finally, a great feat that can really help the character shine is everyone’s favorite warcaster or lucky.

Both work great in helping you concentrate on your spells or increasing your ability to alter a situation to your party’s favor.

As you can see there are many steps needed to making a proper multiclass.

You need to understand what your character’s primary function is going to be.

What their focused class will be and why.

As well as an understanding on the subclasses in each class to make sure you have the best synergy.

Be sure to check out more of my wizard articles or get the best content by getting a book that goes above and beyond what the articles can give and buy my Wizard Mastery Book.

On sale now with many people who love it.

Or read more articles or leave me a comment talking about what you love in each article.

It’s thanks to positive comments and seeing you guys read my articles that gives me the energy to keep posing more.

Have a wonderful day!

Support The Blog, Buy From Our Store!